Spine v4-beta: it has a curve editor!

I cannot run 4.0.22-beta.
Every time I select that version in the launcher, the launcher closes and Spine never opens.
Version 4.0.20-beta runs just fine every time.

@Nate Beta 23 works fine - didn't notice there was a newer version! Thanks.

Using 4.0.26-beta here I only see one key-button next to these transform (I would expect this button to be split on X and Y) and when moving an x-keyframe in the graph on for example translate, y still moves along over the time axis. Also I only see 'Translate', 'Rotate' or 'Scale' as a property-row in the Graph or Dopesheet, not TranslateX/TranslateY etc. So far I'm not seeing buttons to sync/not-sync x and y in the UI neither.

So don't see a change really, but I'm probably missing something here?! How can we put keyframes on only x or y of the transforms in the editor?

When you select a bone in animate mode, it has 3 new checkboxes:

When checked, you'll get separate X/Y timelines for that bone in the current animation. The same goes for slots to separate RGB and alpha:

This allows us to support both combined and separated timelines. It's slightly more efficient to use combined timelines (fewer timelines the less work to apply an animation) unless you key only X or only Y, but the main reason we allow combined timelines is that fewer timelines are easier to manage. If all translate timelines were separate X and Y timelines, it could mean 20+ additional timelines for a moderately complex skeleton (1 extra timeline per bone that keys translation).

I suppose we are two weeks from 4.0 full release right?

And multi monitor is around 3 months away, right? :-)
Founder & CEO Foriero s.r.o.
https://studio.foriero.com

Hi,
Any ETA on cocos2d-x runtimes? Beta and manual integration is ok

Hello,
From version 3.8 and below, I can box select a bundle of keyframes and stretch them but it seem to be no longer exist in spine 4.0
How can I be able to do the same in 4.0?

In v4.0+, make the box selection, then wait about half a second until the edges turn blue, then you can drag the edges. This allows you to box select without having the big box in the way, unless you need it.

Nate yazdı:In v4.0+, make the box selection, then wait about half a second until the edges turn blue, then you can drag the edges. This allows you to box select without having the big box in the way, unless you need it.

Long time Spine user here, I switched to the v4-beta today, overall, fantastic and exciting new features - but I searched for this for about an hour lmao I was all panicked the dragging option would have been disabled (for no reason?), I almost switched back to good ol' Spine v3 because I couldn't figure how to expand my anymation anymore. It's a major change to a core feature when you're an old time user and I think I'm not the only one who will be confused - But maybe you made a notice about this somewhere and I missed it? Sorry if that's the case.

This new selection system works fine tho, it's very pleasant.

Thank you for your hard work I'm very satisfied with this update otherwise.

Sorry Rajah! The delay is pretty low, I expected people to find it after a couple tries. Maybe lowering it a little more would help.

Hi guys, for some unknown reason, when trying to run latest launcher, I'm getting this:

I'm on Windows 7, 64 bits. Never had this issue with previous launcher. Here's, in fact, the two of them: 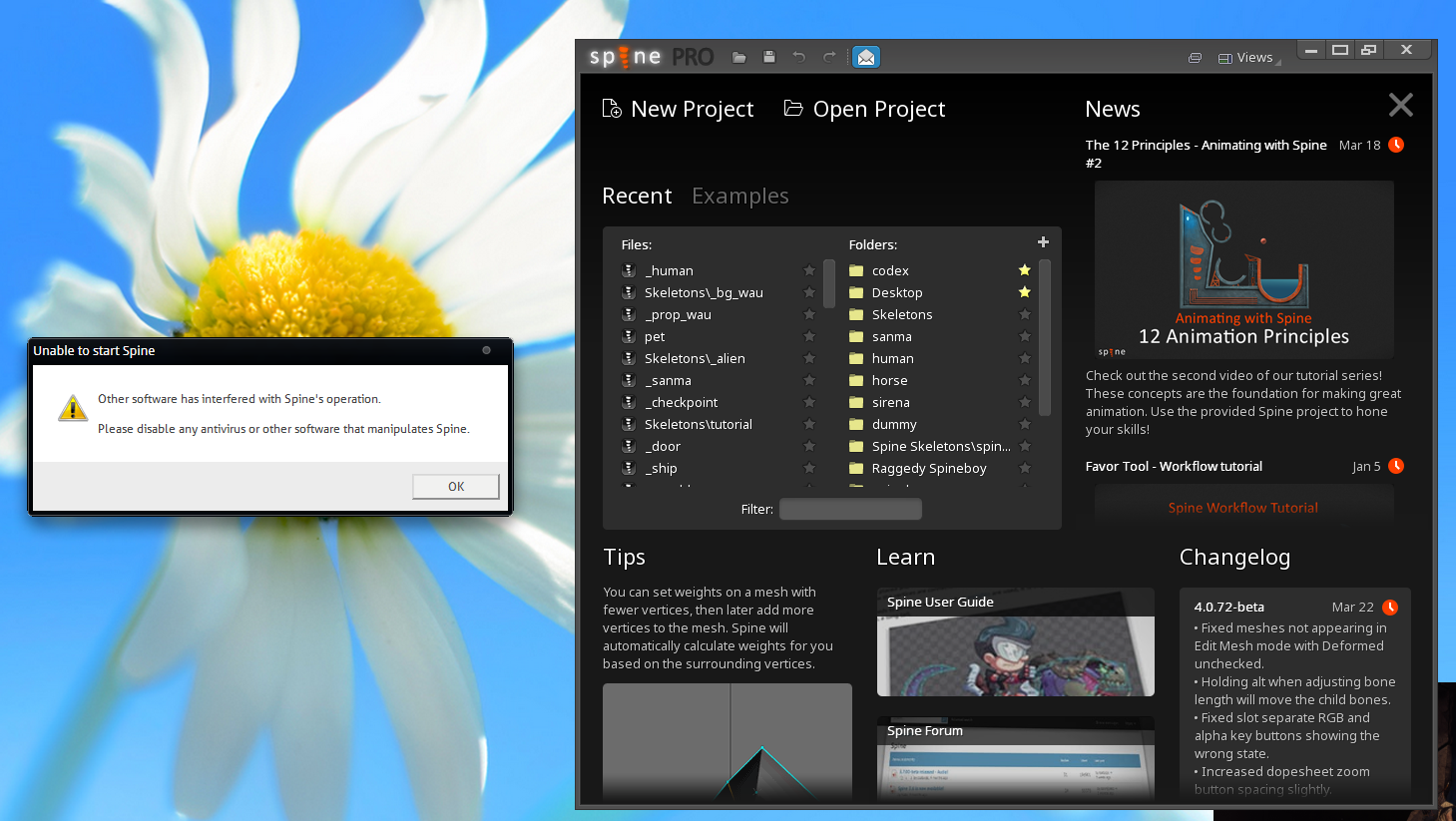 Anybody has any idea what's going on? Thanks in advance.

EDIT: More information - I don't have any antivirus running, I don't have any programs that might hook its process or something, that I know of. Tried disabling firewall, disabling AMD Radeon overlay, doesn't work either.
EDIT2: Seems like my multi-monitor management software might be the culprit, but it's hard to know.

I just can't simply uninstall that software. Can you guys revert this new system back or make it less sensitive? I don't see why this is a good idea at all. It was working perfectly fine before.

EDIT3: It also detects Comodo Firewall .dlls and won't run because of it. I can't uninstall that either.

It's likely Comodo Firewall causing the problem. Another user had the same problem with it:
Unable to launch

Comodo Firewall attaches to Spine's process and mucks around with things even if Comodo Firewall is disabled. That is quite nasty behavior, especially for what is supposed to be a firewall. You said you can't install it, is that because you need a software firewall? If so I can suggest using Windows Firewall Control instead, as I mentioned in that thread.

We have had lots and lots of problems with antivirus wrecking Spine. Sometimes they prevent Spine from running at all. Sometimes they let most of Spine work, but break some parts so it crashes later. Sometimes they let Spine run for a while, then delete or modify Spine's files later. When this stuff is happening, it creates a lot of noise for us. It becomes difficult or impossible for us to tell whether a crash is because there is a legitimate problem we need to fix, or if an antivirus has caused the problem. Users suffer crashes and other problems, contact us about them, and it takes a lot of our time to research the issues.

That is why it's much better to know that other software is poking holes in Spine so it can be fixed up front. Running software that mucks around in every application running on your computer is generally a bad idea. It causes problems with other software, it slows everything that runs on the computer, and it provides very little to no actual protection.

I know you are having a specific problem and would like to solve that. I expect uninstalling Comodo will be sufficient, so I hope that is possible. I doubt UltraMon is a problem. Process Monitor logs a whole lot of stuff for many reasons and not all of it is not important.

Hey, uninstalled Comodo and it works! 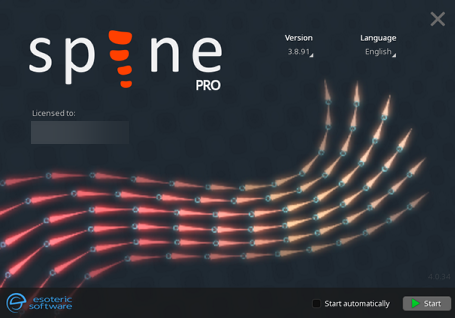 I thought disabling it was enough, but I was wrong. I'm done with Comodo, is not the first time something similar happens.

Thanks for the help and for providing alternatives. ! Curve editor, here I go

Comodo is really bad. I wonder if we should detect it specifically and make it clear that it should be uninstalled. I hate that they create pain for Spine users and work for us!

I have some feedback about the curve editor:
I find it a bit weird, workflow wise, that when we select a keyframe and apply a bezier type, it affects the OUT of the selected keyframe and the IN of the next keyframe.
Because of that, I have trouble getting the exact bezier curve I want without doing everything manually

@funshark, I'm not seeing that behavior in 4.0.75-beta. What version are you using? For example with this curve and selected key: 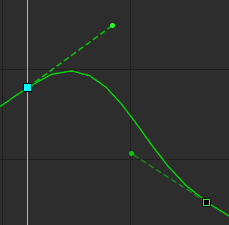 After pressing the "flat" preset button it becomes: 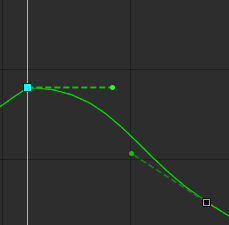 The preset buttons should only affect the handles that originate from the selected keys.

@Nate, it's in 4.0.75.
Using it a little more, it seems it's a bit more complicated than that and it depends on the order in which we use the buttons.
Utlimately, I am able to get what I want with some combinations although the logic behind it is a bit weird

On your screenshot, if I press the "flat" option, I expect the two handles of the same keyframe/point to be flat, but yeah I can understand that it may be useful to be able to apply it only on one side

Also, is there a rough ETA for the v4 release?

Fantastic work on the graph editor, a much needed feature for workflow.

+1 agree with @funshark, it's a bit of a different workflow to work with keys this way. Unity and many 3d software graph editors work by selecting a keyframe and being able to edit the bezier handles on the left/right of the selected keyframe, and not the following unselected keyframe. Not the end of the world, but maybe that way because of the way the current code base is setup?

+1 also wondering if there's any rough ETA for v4 release? I'm a little nervous to introduce a beta version in production, but would really like to use this feature.

funshark yazdı:On your screenshot, if I press the "flat" option, I expect the two handles of the same keyframe/point to be flat, but yeah I can understand that it may be useful to be able to apply it only on one side

funshark yazdı:On your screenshot, if I press the "flat" option, I expect the two handles of the same keyframe/point to be flat, but yeah I can understand that it may be useful to be able to apply it only on one side

Yep, this is how Spine works too. If you guys can let us know how to reproduce any behavior you feel is strange, we're happy to fix it up!

We are ready to release 4.0 now, except we can't just yet because the AS3 and Lua runtimes have not yet been updated. We've had some health issues on the team that have delayed getting it done, but we have adjusted and are working on it. I would hope to have it released within 2-3 weeks.

@funshark if you are using Liner curve, you will not have handles. Let's say you have 3 keys, A,B and C. you want the interpolation between A and B to be linear and between B and C to be Bezier, the B key will have only one handle on the right side of the key, like in your example.
linear.png
If you put key A to be Bezier, key B will have handles from both sides as the interpolation between keys A and B is now Bezier.
Bezier.png
Keep in mind if you want a key to be linear, when you select the key and apply the Linear curve, the interpolation between the selected key and the next one will be linear, hence no handles.
Bu mesaja eklenen dosyaları görüntülemek için gerekli yetkilere sahip değilsiniz.

@Sinisa yeah, I figured it out after a few tries. The thing is, in most other softwares, when you choose to flat down a key, the handles are automatically created and applied. We don't think in term of curve between 2 keys but only in term of key.
Like I said, I can still get what I want, it's just another way of thinking and I can see some advantages to it.

@Nate Thanks for the explanation and the ETA. Greatly appreciated and take care