Tools in Spine are found in the main toolbar:

Right clicking anywhere in the viewport will toggle between the current tool and the last selected tool. This makes using multiple tools more efficient as it is much faster than clicking the toolbar buttons. Otherwise there are default hotkeys for switching tools:

Instead of a dedicated selection tool, Spine uses a smart selection system. Selecting an item in the viewport is done by simply clicking the item you want to select. With most tools, starting a drag on an unselected item will both select that item and begin manipulating it.

Clearing the selection is often unnecessary but can be done by pressing spacebar, escape, or by double clicking anywhere in the viewport. It can be useful to deselect, then drag in an empty area to box select.

It is very common to need to select the same objects that you recently had selected. Finding and selecting them again is very slow, so Spine remembers your selections and you can navigate through them using page down and page up. This greatly reduces tedious hunting in the viewport and scrolling in the tree view.

Selections can be stored by pressing ctrl+1 (cmd+1 on Mac), where 1 can be any of the number keys, 0-9. The selection can later be recalled by pressing the number key without holding ctrl (or cmd). Selection groups can save a lot of time when the same selections are needed often. For example, for a humanoid skeleton selection groups could be stored for the torso, head, arms and legs.

The Rotate, Translate, Scale, and Shear tools each work similarly. The selected item is adjusted by dragging the mouse. The drag should start in empty space or on the item itself. If the drag starts on a different item, that item will be selected and adjusted.

Making adjustments by dragging in empty space reduces fatigue from using the mouse to animate for long hours. Adjustments are quick and precise, without requiring precise interaction with small control handles.

Each transform tool has a numeric display whose values depend on the selected axes. New values can be typed and will take effect when enter or tab is pressed.

The arrow keys can be used to change the value for the selected transform tool. Hold shift while using the arrow keys to adjust the value in smaller increments.

The Local, Parent, and World axes determine the numeric values shown for rotation, translation, and scale, as well as the direction of the axes shown in the viewport. This gives more control over how items are transformed.

How the chosen axes affects each transform tool is explained below.

The pivot point for rotating a bone is always the bone's origin. shift can be held while dragging to constrain rotation to 15 degree increments.

For bones, rotation in setup mode is limited to 0-360 degrees, indicating which direction the bone is pointing. In animate mode, local rotation can be outside that range, indicating both the direction of rotation and the number of complete rotations the bone will make. However, be wary that when World axes are selected, the rotation is limited to 0-360 degrees even in animate mode because it indicates which direction the bone is pointing in world coordinates. In that case the World axes button is highlighted orange as a reminder while typing a rotation value.

The X or Y handles on the Translate tool icon in the viewport can be dragged to restrict translation to a single axis.

Translating multiple bones by Local or Parent axes can be useful to move the bones in different directions the same amount. For example, to make both arms longer. 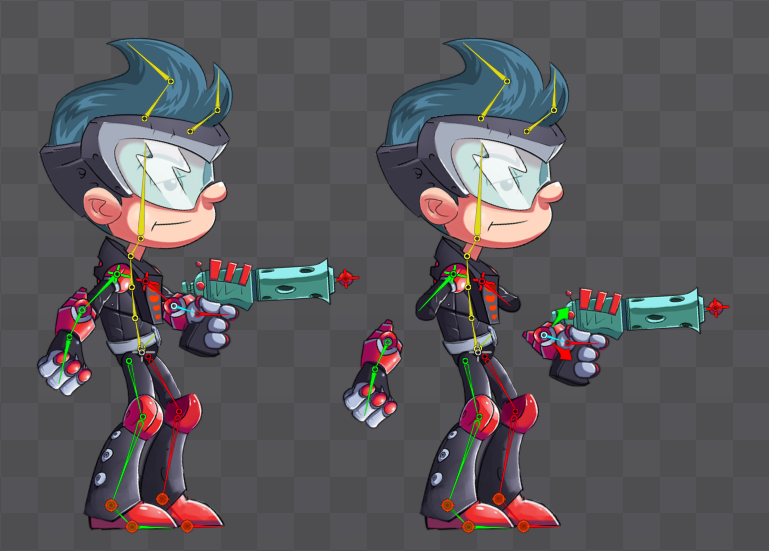 Here the lower arms have been translated along the parent's X axis by choosing Parent axes and then dragging the red X axis arrow on the Translate tool icon.

The X or Y handles on the Scale tool icon in the viewport can be dragged to restrict scaling to a single axis.

Scale is always applied using the item's local axes. The X axis (red) for scaling always points in the direction of the item's rotation.

The world scale cannot be edited directly. When the scale text boxes are focused, the values change to local and the value entered is used as local scale. In that case the Local axes button is highlighted orange as a reminder while typing a scale value.

Flipping is achieved by scaling one or both axes to -1. 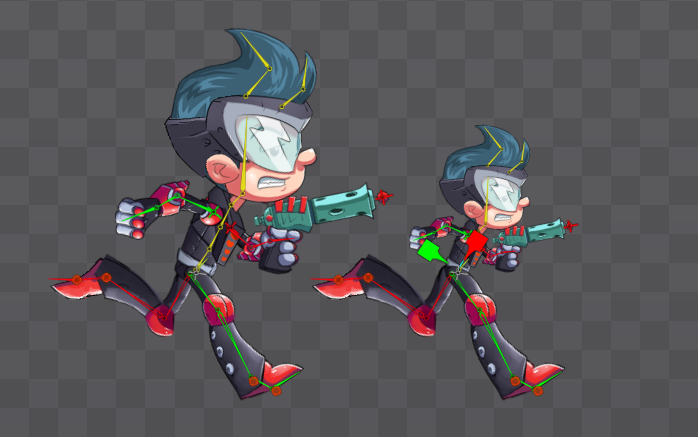 Here spineboy's torso has been scaled down. The child bones of the torso inherit the scale from their parent and are also scaled down. 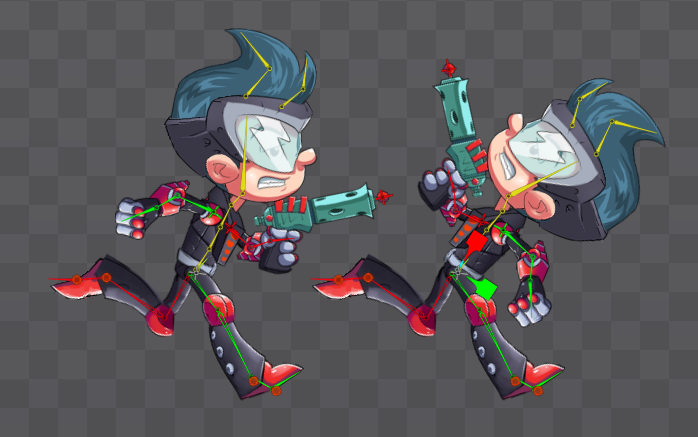 Here spineboy's torso has been scaled on the Y axis (green) to -1. That causes the Y axis to point in the opposite direction, without changing its size. 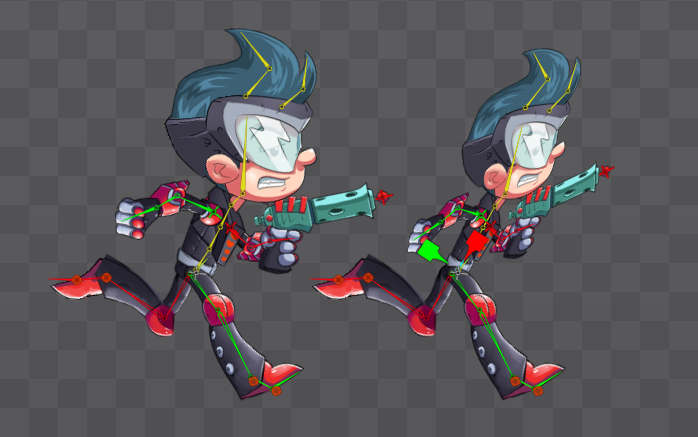 Here spineboy's torso has been scaled down, but only on the Y axis. When the X and Y scales have different values, it is called nonuniform scale. The child bones inherit the scale as before, but since the parent scale squashes them in the parent's Y direction, the child bones are sheared (skewed). 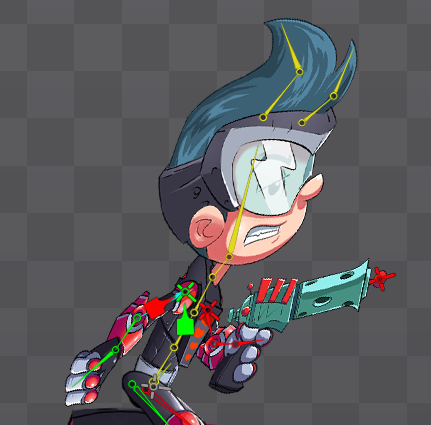 The Y axis is normally 90 degrees to the X axis. Here spineboy's arm is selected to show that the torso bone's scale has sheared the child arm bone, changing the angle between the X and Y axes.

Shear can be applied to an entire hierarchy of bones and is easier to apply than using deform keys or mesh weights. Also, shear is available in Spine Essential while meshes and weights require Spine Professional.

The X or Y handles on the Shear tool icon in the viewport can be dragged to adjust the angle between X and Y axes, causing attachments to be skewed.

Similar to scaling, shearing causes child bones and attachments to deform and is most commonly used in small amounts for organic squash and stretch in animations (for example, see spineboy's head). The deformation from shearing differs from scaling and can help prevent animations from looking rigid or robotic. 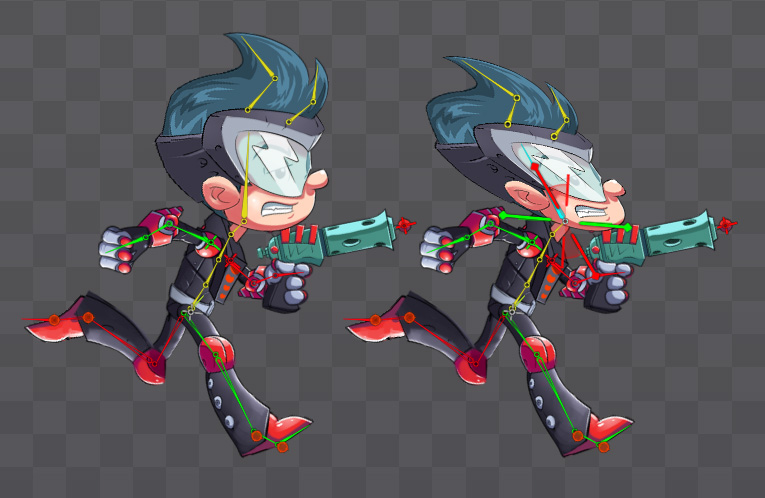 The Pose tool can adjust both bone translation and rotation, allowing for quick bone manipulation without switching tools. While most other tools work by selecting a bone, then dragging in empty space to manipulate the bone, the Pose tool requires dragging handles on the bones.

To translate a bone, move the mouse over the bone's origin so a translate icon appears, then drag. When multiple bones are selected, only the dragged bone is translated.

To rotate a bone, move the mouse anywhere over the bone, except over its origin, so a target icon appears at the tip of the bone, then drag. The bone will rotate to point at the target. When multiple bones are selected, IK (inverse kinematics) is used to rotate all the bones until the tip of the last bone reaches the target. 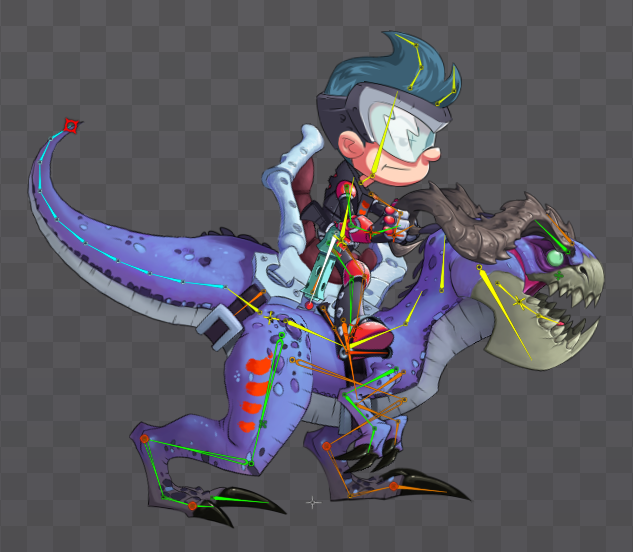 Here the tail is being adjusted by the Pose tool.

Multiple sets of bones that do not have a common parent can be adjusted without losing the selection. 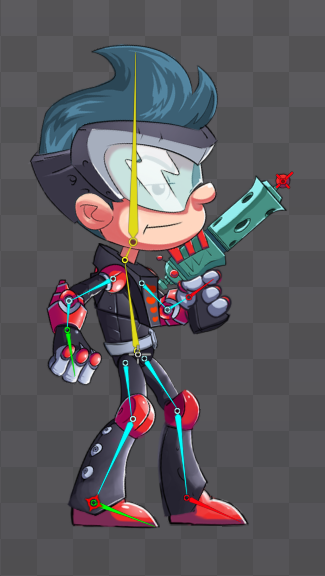 Here both arms and legs are selected. Any selected bone can be dragged to adjust only that limb, without losing the selection of the bones that aren't being adjusted. 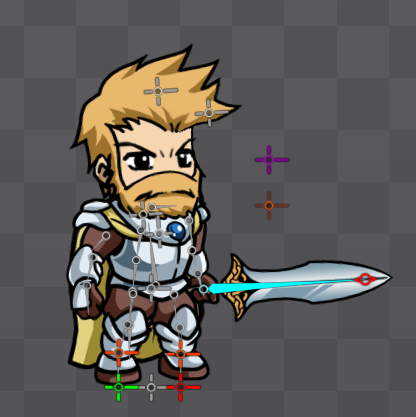 Here the length of the sword bone is being adjusted.

If the bone length tool appears when trying to select a different bone, deselect first.

Hold alt (option on Mac) while dragging to move the child bones the same amount.

Mesh wireframe can be enabled so mesh vertices can be seen when creating bones.

The Create tool creates new bones, which can only be done in setup mode. Before creating a new bone, first select the bone that will be the parent. Next, either click to create a zero length bone or drag to create a bone and set its length.

When choosing where to create bones, keep in mind that bones pivot around their origin when rotated.

In Spine there are no limitations for where a bone is created. Child bones are not required to have their origin at the tip of the parent bone.

To easily fix a bone that is not in the correct position, select the bone, then hold alt (option on Mac) and drag or click to recreate the bone. Any child bones or attachments will be unaffected.

Creating bones, naming them, and moving attachments under them can be a tedious process. Spine provides a workflow to reduce the effort required.

Some image editor scripts, such as the script for Photoshop, can create bones so when the JSON data is imported into Spine, the bones are already there.

By following this process, the slots for the selected attachments are moved to the new bone and the new bone is named using the slot of the first attachment selected. This greatly reduces the time needed to setup a skeleton.

Be sure to disable compensation when it is no longer needed to avoid confusion. The buttons flash orange when compensation is applied.

To move a bone without affecting its attachments, first enable image compensation. This transforms the attachments an opposite amount so they appear to not have changed at all. This works in both setup and animate mode, except in animate mode compensation is not supported for region attachments.

When a bone has nonuniform scaling (meaning the X scale is not the same as the Y scale), due to how attachment positions are stored, image compensation may not be able to adjust attachments so they appear not to move.

The first column controls whether bones, region and mesh attachments, and other attachments can be selected. This can make some tasks easier by preventing accidental selection. Items can still be selected by clicking them in the tree.

The second column controls visibility of bones, region and mesh attachments, and other attachments. It is often useful to hide bones to reduce clutter while animating. When bones are hidden, they can still be selected and appear when under the mouse cursor.

The third column controls visibility of name tags for bones, region and mesh attachments, and other attachments. Name tags increase the amount of clutter for complex skeletons, but can make it much easier to find a specific bone or attachment. A name tag may be clicked to select the item.

Guides will be added to the rulers in a future version of Spine.

Rulers can be shown by clicking the ruler button above the zoom slider in the viewport. The rulers show the mouse position and can help with alignment. The ruler units are in world coordinates, which correspond to pixels for images that have not been scaled. 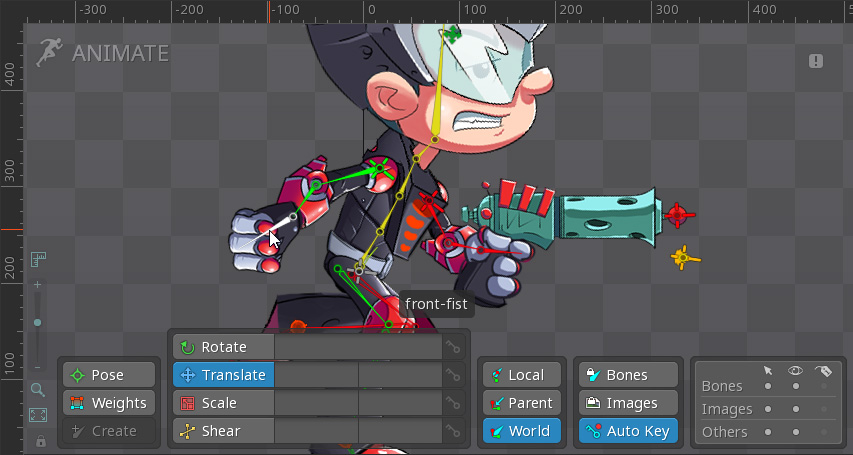 Pasting bone transforms sets the bone rotation, translation, scale, and shear. The bone hierarchy is used when applying the copied bone transforms. This can be useful to make one limb match another, or to copy all or part of a pose from one animation frame to another.

Pasting attachment transforms sets the attachment rotation, translation, and scale. This can also be achieved by dragging an attachment and dropping it on another attachment in the tree.

Pasting vertex positions works for meshes, paths, bounding boxes, and clipping attachments. Vertex positions can be pasted to a different attachment, as long as the same number of vertices is selected. Also, the order the vertices were selected before copying and before pasting should match the order you want the positions to be applied.