The usual way of animating is called "forward kinematics", or FK. FK is a top-down approach: to position the hand the upper arm is rotated, then the lower arm. Many movements can be achieved this way, but others are difficult: to keep the hand in place as the skeleton stands up, the arm bones need to be adjusted continuously. It takes many keys to keep the hand in place.

A better solution for this situation is "inverse kinematics", or IK. IK is a bottom-up approach: the hand position is set, then Spine automatically sets the rotation for the upper and lower arm bones.

IK is useful for many other tasks, such as keeping feet from penetrating the floor during a walk animation, adjusting the IK target at runtime to stand on uneven terrain, chickens, and more. In Spine, bones can be controlled by either FK, IK, or a mix of both. It is also possible to transition smoothly between FK and IK during an animation.

Please note that IK constraints are not available in Spine Essential. 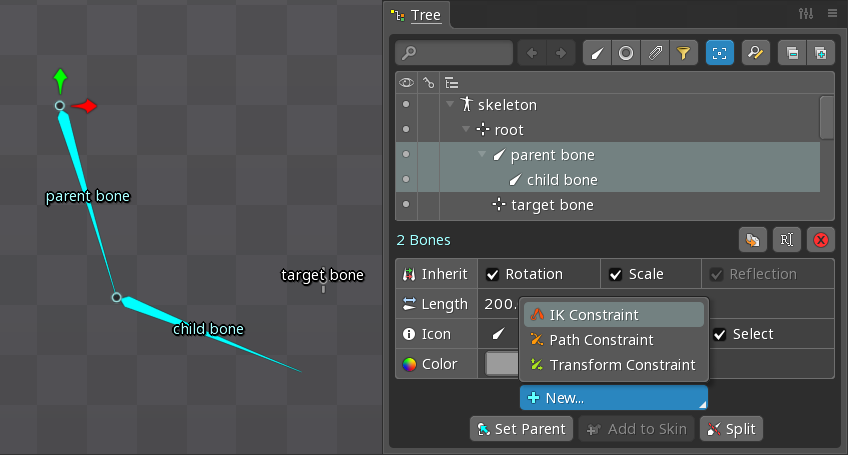 The IK constraint continually adjusts the rotation on the parent and child bones so that the tip of the child bone is at the target bone. 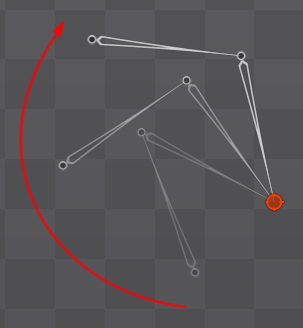 The direction the parent and child bones bend can be changed on the IK constraint. 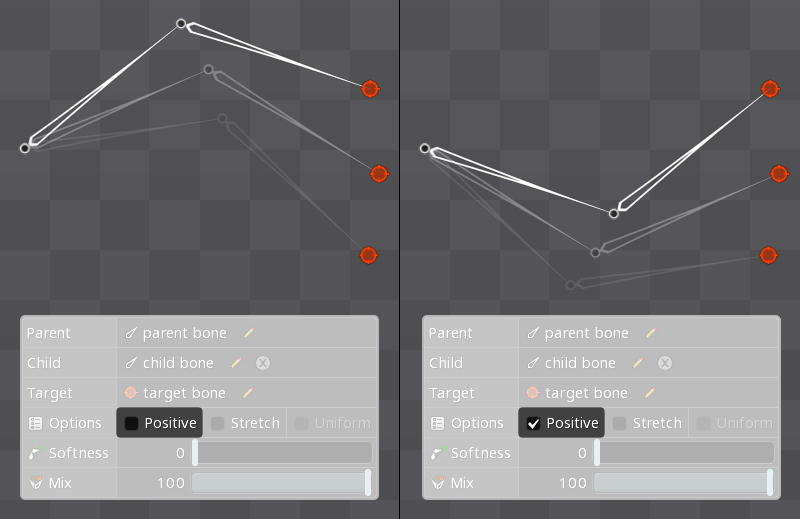 When a bone's rotation is being controlled by an IK constraint the bone appears hollow, indicating that some manual transforms are not possible (see how to disable the IK constraint below).

The Stretch option is available for both one- and two-bone IK constraints. When enabled, all bones in the IK chain will stretch as needed to touch the target bone. However, the bones will not get compressed when the distance to the target bone is smaller than the original bone lengths.

Both Compress and Stretch can be keyed.

For both stretching and compression, the attachments and children of the constrained bones will be scaled on the bone's X axis. For one-bone IK constraints,it is possible to additionally enable the Uniform setting, so scaling is performed on both axes.

For 2-bone IK constraints, it is possible to enable a Softness setting which slows down the bones as the constrained bones straighten. Without this, IK bones will sometimes snap into place as the target goes out of range. Softness can be keyed. While Softness is enabled, the Stretch option is going to be ignored.

The mix slider on the IK constraint controls how much the bone is affected by the constraint. When the mix is 0 only FK is used and when 100 only IK is used. A mix between 0 and 100 results in both FK and IK affecting the bone at the same time. Lines are drawn to show where the bones are in the FK and IK poses.

Often mixing FK and IK is only necessary to transition to and from 0 and 100 during an animation (see Keying below). However, some situations make use of mixing the FK and IK poses to achieve motion that would otherwise be difficult to key. For example, arms waving up/down slightly via IK while also performing another animation via FK. In this case it can be useful to modify the FK pose by clicking the eye dot to disable the IK constraint. 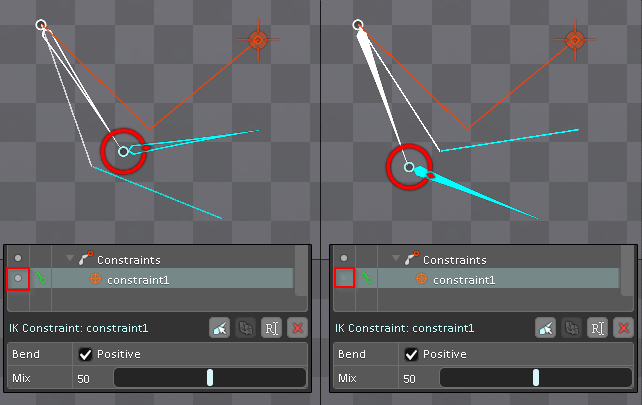 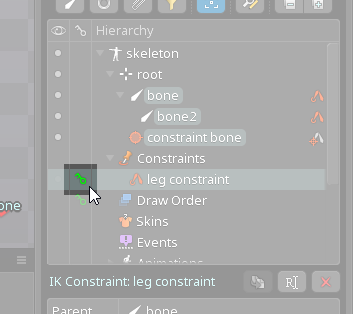 Keying the mix is often useful to enable and disable IK during animations. The Graph can be used to apply a curve to IK keys so the speed of the mix transition can be customized.

Due to the many interactions of IK with bone transforms, a few minor limitations apply: