Keeping track of your Spine editor and Spine Runtimes versions is an important part to using Spine.

Spine editor version numbers use the format major.minor.patch. For example, 3.8.75.

When the major or minor version numbers change, it indicates a significant difference and caution should be used before updating to the newer version.

When only the patch version number changes, it means that we have fixed bugs or have done minor improvements and it is safe for you to update.

The changelog archive provides a list of all Spine editor versions we have ever released.

The Spine Runtimes version numbers use the format major.minor. For example, 3.8. 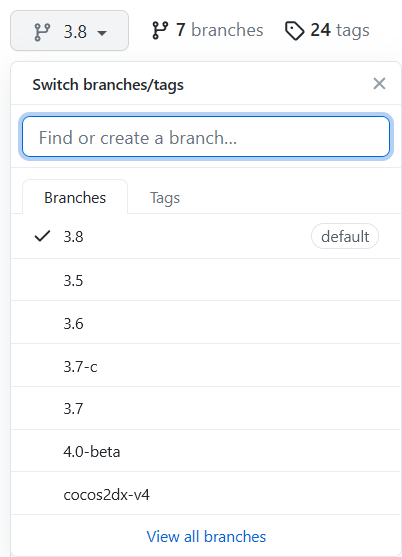 Beta versions let you use the latest new features, but the Spine editor may crash occasionally or have features that are not completely implemented. Also, exports from a beta version may not yet be supported by all Spine Runtimes.

Here are a few reasons you may want to use a beta release:

Once out of beta, the beta Git branch for the Spine Runtimes is removed and replaced with a stable version number.

If the launcher doesn't stop to let you choose a version, it's because you've previously checked Start automatically. In that case, to stop Spine from starting automatically, just click anywhere when the launcher window first appears.

If you choose Latest stable in the version select box, it will run the newest stable, production ready release of the Spine editor.

If you choose Latest beta, it will run the newest Spine editor beta. Beta versions let you try the latest new features, but exports may not yet be supported for all Spine Runtimes. You won't see the Latest beta option if there is currently no beta in progress.

You can also choose a specific Spine editor version. All versions you have downloaded are shown, or you can click Other... and type the version number for any version we've ever released.

Animators must make sure to use the right version of the Spine editor by choosing a specific version. Otherwise, it can be easy to accidentally update to a newer Spine editor version.

It is always safe to update your Spine editor to a newer patch version, which means it has bug fixes. For example, if you are using 3.6.44, you can update to the newer 3.6.53 without worrying that something breaks or that your exports will no longer work with the 3.6 Spine Runtimes.

It is always safe to update your Spine Runtimes to a newer Git commit on the same branch. For example, if you are using the 3.6 branch, you can update to the latest commit on that branch without worrying that something breaks. Exports from any 3.6.xx Spine editor will continue to work.

Animators and developers need to communicate when updating the major or minor versions so both the Spine editor and Spine Runtimes are updated at the same time.

We suggest writing scripts using the command line interface to automate exporting all your projects. This can be done as needed or as part of a build process.

Spine shows a warning before saving a project with a newer Spine editor version.

Recovering work from a newer version

To attempt to recover the work, you can use JSON export and set the Version to the older Spine editor version. This may result in data loss if the older version does not have features used in the newer version. For example, when using 4.0 to export JSON data for 3.8, the curves for all animations will be lost because 3.8 lacks the ability to express the curves created in 4.0.

Spine project files should be kept safe and stored for future use. Project files can always be opened by the same or newer versions of the Spine editor.

Exported JSON or binary files are not a good choice for storage. They can be imported back into the Spine editor, but only into the same version that exported the data. If nonessential data was not exported, importing the data back into Spine will lose some information. Once imported, a Spine project file can be saved and that can be opened in a new version of the Spine editor.

If a large number of JSON or binary files need to be imported and saved as Spine project files, the command line interface can be used. For example, the first command below imports JSON that was exported with 3.6.51 and saves it as a project file. The second command uses 4.0.10 to export the project file as 4.0.10 JSON.